Museum Photo Studio Seidel has been awarded the main prize in the "Best Museum Initiative of the Year 2008" in the 7th annual national museum competition Gloria musaealis. The festive awards ceremony took place on 14 May in the Pantheon of the main building of the National Museum. The director of Český Krumlov Development Fund and the vice-mayor of Český Krumlov, Ms. Jitka Zikmundová were there in person to receive this prestigious award for the best museum initiative of 2008. Ms. Zikmundová was quoted as saying: "The Seidel Museum is a truly unique project and is not only a significant cultural achievement but also important for the development of tourism. For the locals, this is an almost invaluable entry ticket into their own history and a rich well of stories about people and the landscape from the past". The Museum Photo Studio Seidel has been opened on 6 June 2008 after a painstaking reconstruction lasting several years. Over 6000 visitors have visited the Museum in less than one year since the opening. The Museum offers not only a permanent exhibition dedicated to the life and work of Mr. Josef and  František Seidel but also regular temporary exhibitions. In April this year, the Český Krumlov Development Fund has been awarded a honorary mentioned in the PRESTA South Bohemia contest for the successful reconstruction of the buildings housing the Museum Photo Studio Seidel.

Mr. Miroslav Reitinger, director of the Český Krumlov Development Fund, has stated: "I feel really honoured to receive this award as it confirms that the path we chose was indeed the correct one and that our efforts lasting several years were successful. I find it truly amazing that this Museum, open for less than a year now, has enchanted both the experts and the general public".

The property, comprising of a family villa with a photo studio, has been in the ownership of the Český Krumlov Development Fund since 2005. The overall investment required to reconstruct the building, restore the furniture, interior and the preserved photo studio equipment as well as conserving and archiving of the photographs themselves has been in excess of 30 million Czech crowns so far. This also includes the transfer of the initial batch of 4000 glass negatives into digital storage. The building itself became a listed heritage object. The Museum Photo Studio Seidel is unique in particular because of its scope and authenticity. Here you find a well preserved building together with the photo studio with only minimal changes to the original construction, as well as most of the original technical equipment of the photo studio as well as vast quantities of photographs themselves. Mr. Miroslav Reitinger has added: "The Museum Photo Studio Seidel is a cultural project of worldwide importance. This is evidenced by the continued interest of many Czech and foreign partners, but also by the nomination for the prestigious Gloria musaealis awards, all in  less than one year since opening". 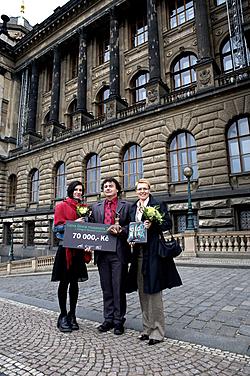 The Best Museum Enterprise of 2008 is an award aimed at particular innovative activities of various museums resulting in a significant and/or long-term improvement of their collections, care for the collections as well as a particularly valuable addition to the collections. Also nominated were initiatives to rescue an important natural environment or a landscape or a cultural monument and opening these sights to the general public. All these nominated initiatives were concluded between 1 January 2008 and 29 February 2009. In total there were 23 applications and the following establishments:

The founders of the Gloria musaealis contest are the Ministry of Culture and the Association of Museums and Galleries of the Czech Republic.  The contest principal aim is to highlight the importance of museums and galleries in maintaining and protecting the cultural heritage and also to recognize exceptional achievements of both institutions and individual experts. There are three main categories: The Museum Exhibition of the Year, The Museum Publication of the Year and The Best Museum Enterprise. There were in total 81 applications from 52 museums and galleries from the entire Czech Republic for the 7th annual contest. A seven-member jury has evaluated all the projects. Top three projects were announced in each category. In addition, a special prize has been awarded in The Best Museum Enterprise category.

For more information on the contest, please view the following websites: